Subscribe for updates from Annihilator to not miss the next gig Sure, notify me 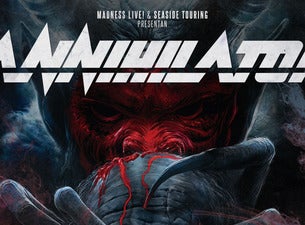 Annihilator is a Canadian thrash metal band founded in 1984 by vocalist, guitarist, bassist, songwriter, engineer, producer, mixer, mastering engineer Jeff Waters and former vocalist John Bates. They are the highest-selling heavy metal group from Canada in Canadian history, having sold more than 3 million albums worldwide, although most of their sales have been generated outside of the band's home country. Their first two studio albums, Alice in Hell and Never, Neverland, are considered to be influential Canadian heavy metal records. Discography Alice in Hell (1989) Never, Neverland (1990) Set the World on Fire (1993) King of the Kill (1994) Refresh the Demon (1996) Remains (1997) Criteria for a Black Widow (1999) Carnival Diablos (2001) Waking the Fury (2002) All for You (2004) Schizo Deluxe (2005) Metal (2007) Annihilator (2010) Feast (2013) Suicide Society (2015)