Subscribe for updates from D.R.I. to not miss the next gig Sure, notify me 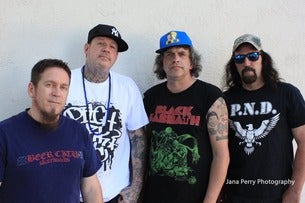 D.R.I. (Dirty Rotten Imbeciles) are a hardcore punk band formed in Houston, USA in 1982. Current line-up comprises founding members vocalist Kurt Brecht and guitarist Spike Cassidy, as well as drummer Rob Rampy and bassist Harald Oimoen. D.R.I. never gained a mainstream audience, but integrating hardcore punk roots with thrash-metal influences was a stylistic catalyst for their contemporaries - most notably Agnostic Front, Corrosion Of Conformity, Verbal Abuse, Cro-Mags, Dr. Know - alongside whom they are considered pioneers of what they called "Crossover" in their third album (1987). To date, D.R.I. have released 7 albums. Since then, the band has continued touring and intermittently going on hiatus. In 2004, D.R.I. released a web-only demo track "Against Me", their first recording in a decade. For years, there has been talk of an eighth D.R.I. album, which has yet to materialize. D.R.I. has also its own label called "Rotten Records". https://myspace.com/dri2 http://www.rottenrecords.com/ http://www.dirtyrottenimbeciles.com/ http://www.metal-archives.com/bands/D.R.I./5928 http://en.wikipedia.org/wiki/Dirty_Rotten_Imbeciles https://www.facebook.com/pages/DRI/137263955229 https://www.youtube.com/channel/UCiqxw7R30YfOttjpmvB2udQ http://www.discogs.com/artist/255969-Dirty-Rotten-Imbeciles