Subscribe for updates from Jinjer to not miss the next gig Sure, notify me 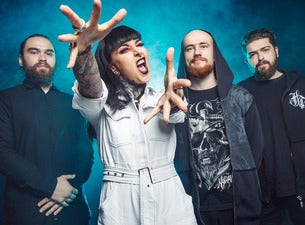 Jinjer is a Ukrainian metalcore band from Donetsk. Jinjer was originally formed in 2009 by Maksym Fatullaiev (vocals), Dmitriy Oksen (rhythm guitar), and Vyacheslav Okhrimenko (drums). However, the band considers 2010 as its official year of formation when Tatiana Shmailyuk replaced Fatullaiev on vocals and Roman Ibramkhalilov was picked up for the lead guitar. Since their inception, the band has released three full-length albums and three EPs. The band has mentioned many of their influences for their music, including Guano Apes, Slayer, Death, Pantera, Anathema, Lamb of God, Gojira, and Twelve Foot Ninja. While explaining their influences, the band have noted other metal acts like Opeth, Karnivool and Textures, in addition to groups across the spectrum of R&B, soul, funk, jazz, reggae, and hip-hop acts such as Cypress Hill and House of Pain. Links: http://jinjer-metal.com http://www.facebook.com/JinjerOfficial http://jinjer.bandcamp.com