Subscribe for updates from La Pegatina to not miss the next gig Sure, notify me 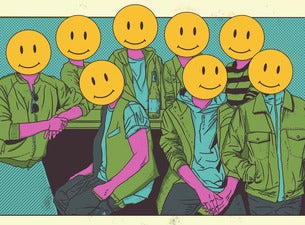 The band was born in 2003 with the name "Pegatina Sound System" after Ovidi i Adrià meet Rubén, who up to that moment was playing solo. They decided to throw forward the project, without knowing to where it would go. One year later they had more than 20 performances under their belts and were one of the most active groups in the Catalan market. The band were starting to take part in festivals and performances in different places in Spain. They established the official name "La Pegatina", and after more than 90 concerts, they continue to enjoy performances and surprising audiences like it was the first day. They belong to a generation who has lived through the ascent of the mestizaje in the international panorama and have grown up with the return of the Catalan rumba to the musical youth panorama. The members of the group have been greatly influenced by the environment of Barcelona's Gothic neighborhood, which, even being born in Montcada i Reixac, they represent many styles. They mix Spanish, Catalan and Galician in their songs and in some cases, dare with other languages such as English or French. La Pegatina is a group with a vocation of playing live. They embody a non-pretentious style, focused directly on the public. A fundamentally urban group, some of their best performances have been in squares, streets, suburban trains or buses, calling attention on people and making them dance and sing. What do they play? Urban Rumba! Thats the kind of rumba that makes you move and ask for more, until you are too tired to walk... They are show-addicts, who play simple but direct music and words which are repeated and shouted by most of the public that see them. Days after seeing them live, you can discover yourself singing some of their rumbitas... Their songs contain protest messages in defense of human rights, respect and against injustice, war and lies, using normally nearby examples to illustrate these universal values. Their first CD " Al Carrer! " appeared in early 2007, after an intense autumn working in LLobregat's Sukhà de Hospitalet, where they combined the CD recording in the studio with last years performances. " Al Carrer! " consists of 13 songs played in "La Pegatina" pure style, including a genuine bonus track. The CD is full of important collaborations: Gambeat (Radio Bemba's bass) lends a hand for the entire CD, Leo and Kachafaz (Che Sudaka's members) contribute for "No a la guerra", Alguer (Txarangö) on "Penjat", Emma Calafell gives her voice for "Petrolero", and Manu Chao plays the guitar on "O Camareiro" (this song appeared on the "A Per Loca" compilation, but they rearranged it). In conclusion, "La pegatina" means party, happiness, dancing and fun!