Subscribe for updates from Marcin Wasilewski Trio to not miss the next gig Sure, notify me 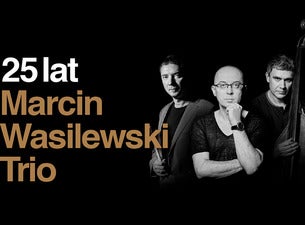 The trio of Marcin Wasilewski, Slawomir Kurkiewicz and Michal Miskiewicz is one of the most outstanding contemporary jazz groups. Their friend and mentor trumpeter Tomasz Stańko has said, “In the entire history of Polish jazz we've never had a band like this one. They just keep getting better and better.” It was through Stańko's ECM recording Soul of Things, recorded 2001, that the wider world first had a hint of the capacity of Wasilewski/Kurkiewicz/Miskiewicz. Since then, they've toured widely with Stanko and contributed mightily to his quartet recordings Suspended Night and Lontano, recorded in 2003 and 2005. The trio's dark, swirling rubato performance has the stark drama and predatory lyricism associated Stanko; they've played the piece often in concert with the composer. On their 2004 ECM disc, the trio offered a luminous version of Björk's “Hyperballad”. This season's pop cover is Prince's “Diamonds and Pearls,” the ballad from 1991 which gains a deal of mystery in this stripped-down interpretation in which bassist Kurkiewicz shares the melody with Wasilewski. The cinematic arts are never far away in Polish jazz; ever since 1958, when Komeda first collaborated with Polanski, the genres have influenced each other. Wasilewski's “The Young and Cinema” references an identically-titled festival of new Polish films held in Koszalin. The trio also covers Ennio Morricone's title theme for Giuseppe Tornatore's 1988 film “Cinema Paradiso,” itself a celebration of film. The album closes with a trio improvisation, a free ballad made in the moment and specific to its time and place, “New York 2007.” As already demonstrated on Stańko's Lontano, these are players extremely adept at creating songs in real time.