Subscribe for updates from Scarlxrd to not miss the next gig Sure, notify me 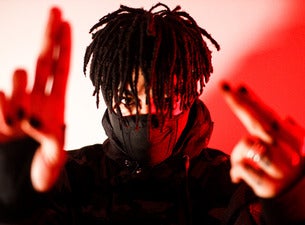 Marius Listhrop (born 19 June 1994), known professionally as Scarlxrd (pronounced "scarlord"), is a English musician. He is known for his unusual musical style combining elements of trap music with influences from metal music. Formerly a YouTube personality known as Mazzi Maz, Scarlxrd began a career in music as the lead vocalist for nu metal band Myth City, before debuting as a rapper under his Scarlxrd moniker. He is known to replace the letter "o" with "x", which is shown in his stage name and song titles. Scarlxrd's visual aesthetic within his music videos and clothing style is heavily influenced from Japanese culture, especially anime. His signature surgical mask, was inspired by the Japanese manga Tokyo Ghoul. Scarlxrd also cited American heavy metal band Slipknot as an inspiration towards his visuals.