Subscribe for updates from When Saints Go MacHine to not miss the next gig Sure, notify me 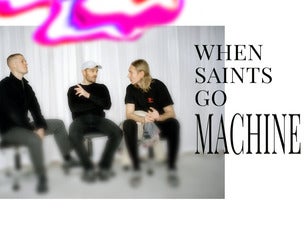 When Saints Go Machine is a Danish electro-pop band from Copenhagen, Denmark. The group consists of Silas Moldenhawer (drums), Jonas Kenton (synth, vocals), Simon Muschinsky (keys) and Nikolaj Manuel Vonsild (vocals). When Saints Go Machine was formed in 2007 and debuted with their self titled EP in 2008. In May 2009 they released their debut album, Ten Makes a Face. The group was awarded P3 Talent by P3 Guld 2008, and the P3 Award the following year. In 2010 the group opened Orange Stage at Roskilde Festival. When Saints Go Machine signed a contract with German label !K7 Records in October 2010 for releases outside Scandinavia. On May 16th 2011 the group published its second studio album, Konkylie and on May 20th 2013 they released their third album, Infinity Pool.